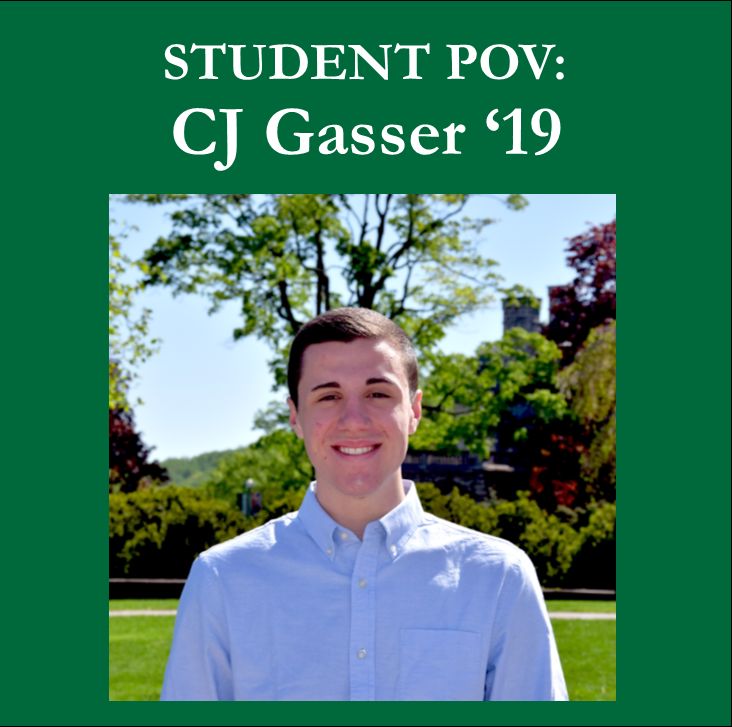 Friday was CJ Gasser's last day as a Delbarton student. In his six years, he grew into a confident, capable student leader and discovered a deeply satisfying spiritual life...

Friday, May 3 was CJ Gasser's last day as a student at Delbarton School. In his six years here, he has grown into a confident, capable student leader--a Campus Minister, a junior and senior Dean, the editor-in-chief-of The Courier, a student ambassador, and the founder of the Artists' Collective. When we sat down to chat, CJ explained what he found most impactful in his time here: the ability to develop spiritually. In his own words: "What I've discovered over six years is finding the silence, accepting the silence, and turning the silence into God's voice."

While CJ did not consider his faith a major priority in middle school, he recalls an epiphany at the end of 8th grade that helped him realize what he wanted for himself academically, spiritually, and physically. He worked to strengthen his body and lose weight, a task that took a lot of effort and left him physically and spiritually fortified. "It was a trial," he says, "but the trial helped make me stronger. The trial helped me find God."

CJ's friendship with the late Abbot Giles was similarly transformative. "My relationship with Abbot Giles was incredible, something that I will always cherish. He was very in tune with everyone. To his final days...he was such a good listener, so empathetic to others' feelings. He could always turn weaknesses into ways to grow. He knew how to help you discover your true self, God's gift to you." CJ remembers Abbot Giles' funeral service as one of his most significant Delbarton experiences. "It was an overwhelming and empowering funeral service...as an altar server, standing in front of the entire congregation and all of the people who came out to the service, it was unbelievable how close I felt to everyone at Delbarton, myself, and God." For CJ, Abbot Giles was not just a friend and mentor, but an inspiration. Abbot Giles' greatest hope was that every Delbarton student would be able to experience God in his own way. His funeral service was a beautiful tribute to a life well-lived.

CJ is off to Georgetown University in the fall, where he hopes to major in theology. "It's incredibly exciting to transition from a Benedictine school to a Jesuit institution and see the juxtaposition between the two orders." CJ is particularly moved by the Jesuit values of cura personalis and ad majorem Dei gloriam, care of the whole person and ceaseless striving for the greater glory of God. In his words, "It's incredible to see what I've learned at Delbarton and how I'm going to apply it at Georgetown. I've realized that you need to do what makes you truly happy, not necessarily what others want for you. Kids can get caught up with the number of zeros at the end of their paycheck. I don't find fulfillment in that. Finding a sense of fulfillment in how much you make or your title is meaningless. Doing what you love and adore is what it means to be human, to be a child of God. Georgetown will take care of me and help me in this mastery of discovering. I'm looking forward to gaining a new perspective through the Jesuits and being a Hoya."

CJ's advice for current and upcoming Delbarton students is rooted in Ignatian philosophy--"Act as if everything depends on you, but trust as if everything depends on God." He credits his mother for instilling this particular mantra in him. He goes on to say, "Just find that sense of peace and be grateful for what is at hand. Don't worry! Take each day as a gift. Have that sense of trust with God, that wherever we go at Delbarton is where we belong. That here, we belong."

If you want to read more about CJ's Delbarton experience, check out the farewell pieces he's been publishing in The Courier here.
Share to FacebookShare to TwitterShare to Google+Share to LinkedInShare to PinterestShare to EmailPrint this page
Powered by Finalsite