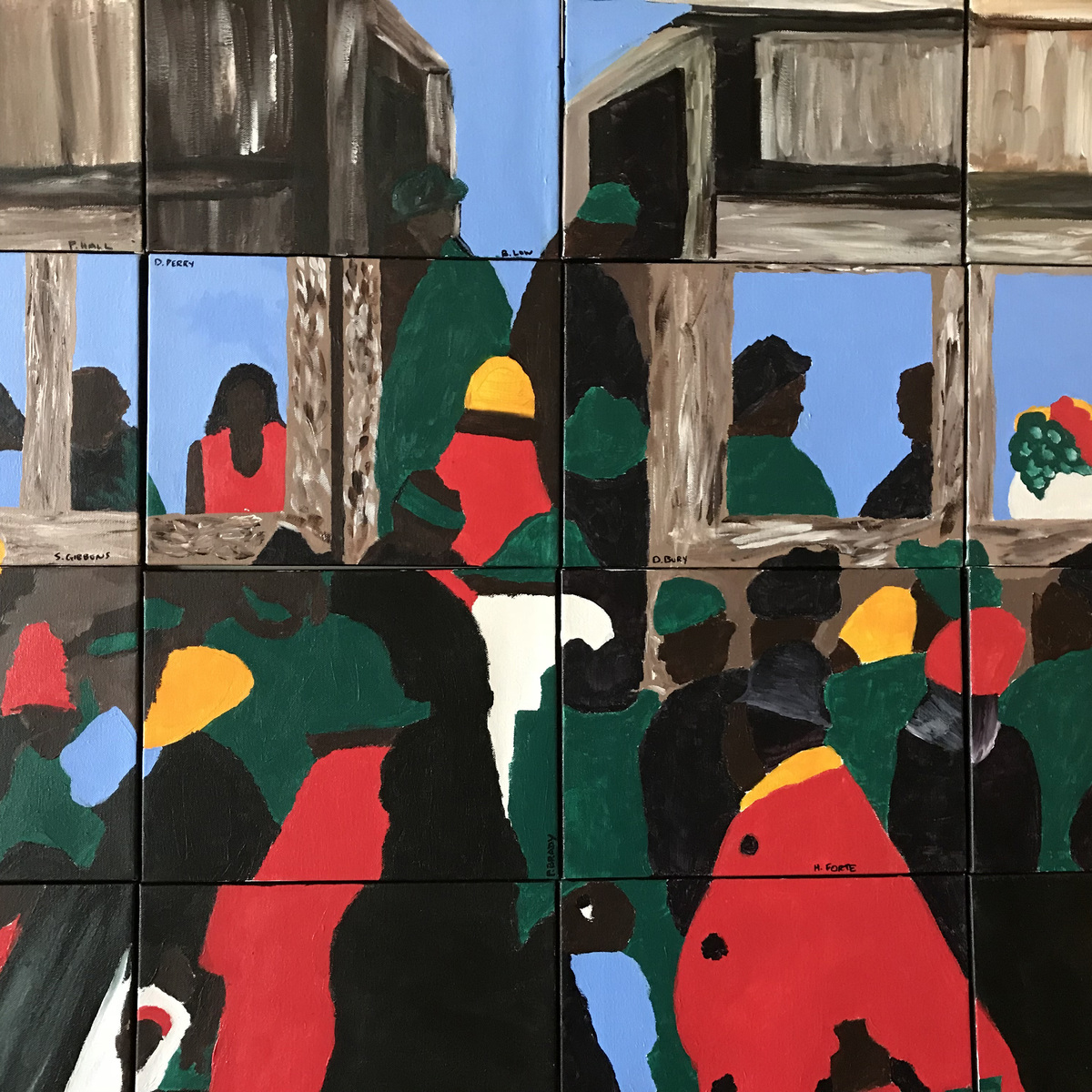 8th grade artists depicted a panel from Jacob Lawrence's Migration Series, on display in Old Main in anticipation of DAP's Celebration of Black History and Culture on Friday evening, March 29...

In February, Diane Lopez and Caitlin Servilio's winter term 8th grade classes collaborated on a bold and colorful mural currently on display in Old Main where the contrast of vintage architecture and bold bright colors makes quite an impression. The project was inspired by panel 23 ("The migration spread," 1940-41, casein tempera on hardboard) from Jacob Lawrence's Migration Series. 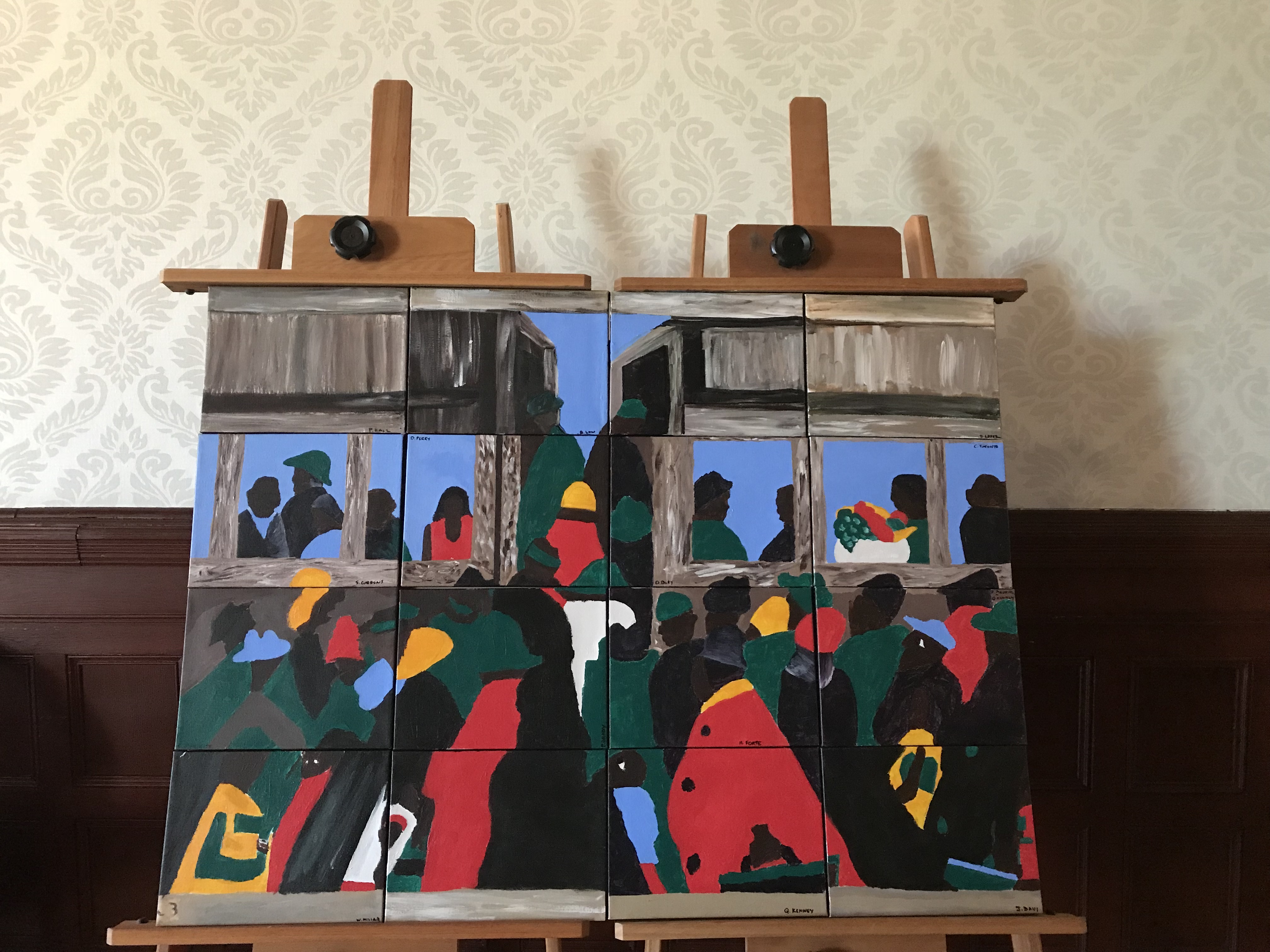 Jacob Lawrence (1917-2000) was an important African American artist who created the series as part of the WPA Federal Art Project, a New Deal program created in 1935 during the Great Depression to fund visual arts in the United States. WPA stands for Works Progress Administration, and the arts projects, while serving an obvious cultural function, were devised as a way to employ financially struggling artists and artisans who the US government put to work creating murals, sculpture, paintings and more.

Lawrence's series chronicles the mass migration of African Americans from the rural South to the industrial North between WWI and WWII, and includes 60 panels in total. Panel 23, in which a group of migrant travelers board a train headed north, showcases some of Lawrence's signature traits: an emphasis on geometric shapes, a colorful, abstract style, and an interest in African American history. The series was the subject of a solo show at the Downtown Gallery in Manhattan in 1941. In fact, Lawrence was one of the first black artists to be represented by a New York gallery. Interest in the series was intense. Ultimately, The Phillips Collection and New York's Museum of Modern Art agreed to divide the 60 panels, with the Phillips buying the odd-numbered paintings and MoMA acquiring the even-numbered works.

Here is the original Panel 23 by Jacob Lawrence... 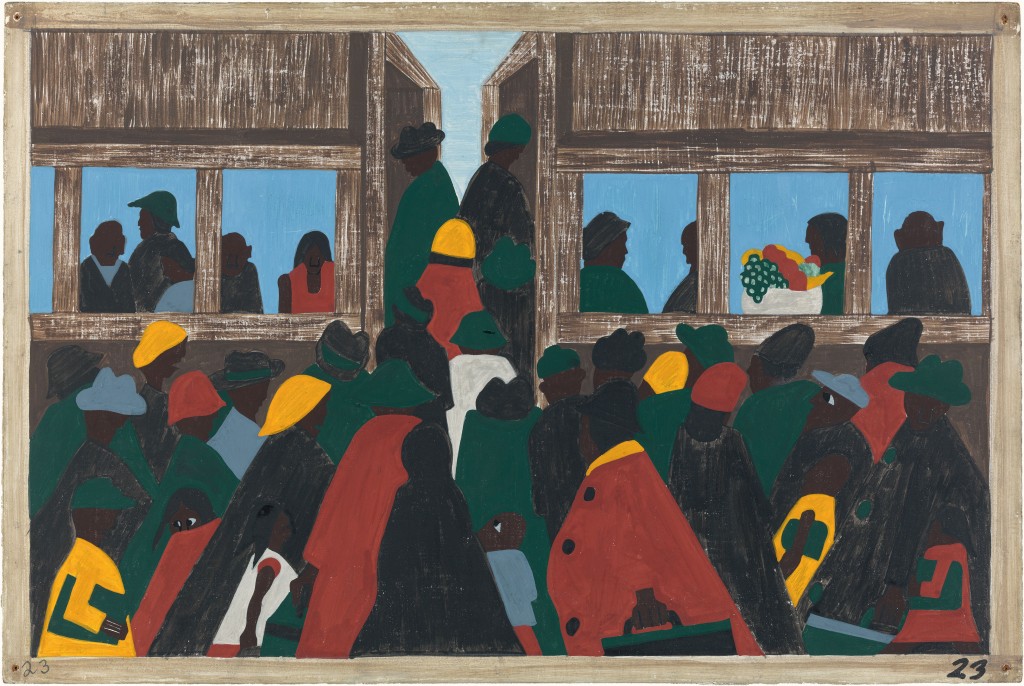 For the Delbarton project, each of the two 8th grade art classes divided the image into 12 sections and every student worked in acrylic paint on one 9x12" canvas. For a consistent look, students worked together to ensure they used the same colors throughout, just as Jacob Lawrence did to maintain tonal quality across all 60 panels of his series. Our young artists also had to be careful to transfer their part of the image accurately, so each section could flow smoothly into the next.

In February, 8th-grader Davis Perry presented the mural on behalf of the class to visitors at the Black History Month Fair and the piece will highlight the upcoming Celebration of Black History and Culture sponsored by DAP (Diversity Among Peers) on Friday, March 29 at 6:00 pm in Old Main.